Reflect on our changed world and the new culture of participation as described in lecture and by Wesch – what does this mean for your future classroom? What does it mean for schools in general? How might we rethink the idea of schooling and education in our networked, participatory, and digital world?

This week I watched “An Anthropological Introduction to YouTube“, which is a video from 2008 featuring Michael Wesch. In this video discusses the spread of one of the first viral memes: Gary Browsma and his dance in front of a webcam to Numa Numa, normally I am fairly familiar with pop culture, but, I had actually never seen this video before. So I watched the video, and my first thought was “Okay it’s funny, but, there are much funnier things out there” which caused me to realize that what Wesch said about media and our human relationships was true: “media mediates our relationships, so when media changes our relationships change.” I mean if you watch old viral videos the sense of humour shared then is not the same as what it is now. If you need an example of this, go and watch some compilation of old Vines on YouTube, the things we find funny will completely baffle some people. This video is a great example:

Now, when I watch this Vine, my stomach hurts from laughing so hard, but, if I show it to my parents they look at me like I am stupid, yet they would laugh at a classic America’s Funniest Home Videos compilation. This is the type of humour that is funny, we no longer laugh strictly about silly cats, we now get a kick out of people causing others grief. Memes on the internet have evolved and if you haven’t kept up with the times it’s incredibly hard to catch up.

In the next part of the videos, Wesch goes onto discuss how one of his own videos went viral and then how “Crank That” by Souja Boy actually came to be. This was something I also did not know (geeze maybe I’m not as up with the times as I thought?) Apparently the song was made by a guy doing some advanced remixing on his computer, the dance went viral around the world, and then he was signed with a record label and they created the music video. I would like to say that this sort of thing surprises me, but, it really doesn’t. We have seen many examples of people going viral and becoming famous as a result of it. Does this look familiar to you by chance? 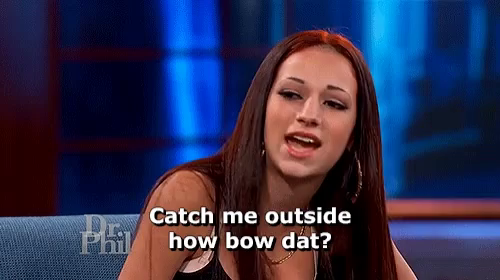 We live in a world where the media can either make or break your life. Think of Roseanne Barr for example, she ruined her career with ONE tweet. When things like this happen on a daily basis we have to ensure that in education we are using this powerful tool we call the internet in a responsible way. We often try to shy away from the internet because we are scared of it, but, we should be using it to empower our students. We just have to make sure we do it the right way, show them what can happen if you use the internet in the wrong way, but also show them how it can be an amazing tool if they use it properly.

In my future classroom, I would love to see technology as a way for students to connect with people around the world and create learning environments, however, as we have seen already technology can be harmful if not used properly. So I am going to try my best to help students become responsible and make good choices when they use it because let’s be really honest here, they are going to be using it anyway. I think for the future of education as a whole, technology is going to take us to amazing places. We use it already for my online class Educational Technology 300 and it is super cool. The Zoom app allows us to have an incredibly interactive classroom in fact, it can be more interactive than an in-person class. I also think it will eventually take the pressure off of teachers to be the “expert” because we will have access to others through our learning circle within seconds. Technology is going to make it easier for children to learn because they are going to always have experts at their fingertips.

Overall, I really do think technology is going to improve education because it allows us to do so much more than we can do now. Things are only going to get better and better as technology improves. What do you think?

One thought on “The Evolution of Memes”